Although you probably know a bunch of people who have had surgery on their ruptured Anterior Cruciate Ligament (ACL), they are relatively uncommon injuries. The reason we always hear about them is their severity in terms of short-term problems, time missed from sport or activity and their longer-term implications. ACL injuries are common in sports that include deceleration, landing, pivoting and cutting such as basketball, football, netball and rugby. They are also very common in snow sports. In clinic we see a large number of ACL injuries during the ski-season! The majority of ACL injuries occur in non-contact situations, meaning that the cause was not a direct blow to the knee by another person or object.

It is commonly cited that Women are at least twice as likely to rupture their ACL than Men, although a recent meta-analysis put this ratio at 1.7x higher in female athletes than males (Montalvo et al. 2018). Either way, if you are a female netball or football player reading this, then that still sucks.

You may have read a lot about ACL injury prevention programmes, there are a huge number out their claiming that they can stop it happening, each having varying degrees of success. In reality it is impossible to completely prevent any injury, however we can take measures to improve the likelihood of avoiding this pretty devastating injury.

It is well established and recognised that ACL injuries occur during movements where high knee valgus loads (see pictures) are evident (Hewett et al. 2010). A great compilation of ACL injury mechanisms can be found here (warning, not for the faint hearted!). It therefore makes sense to try and avoid this movement in the first place. This is the overriding goal of most ACL injury reduction programmes.

In our own lab at the University of Salford, we have found several ways to achieve this; feedback, jump training and strength training. 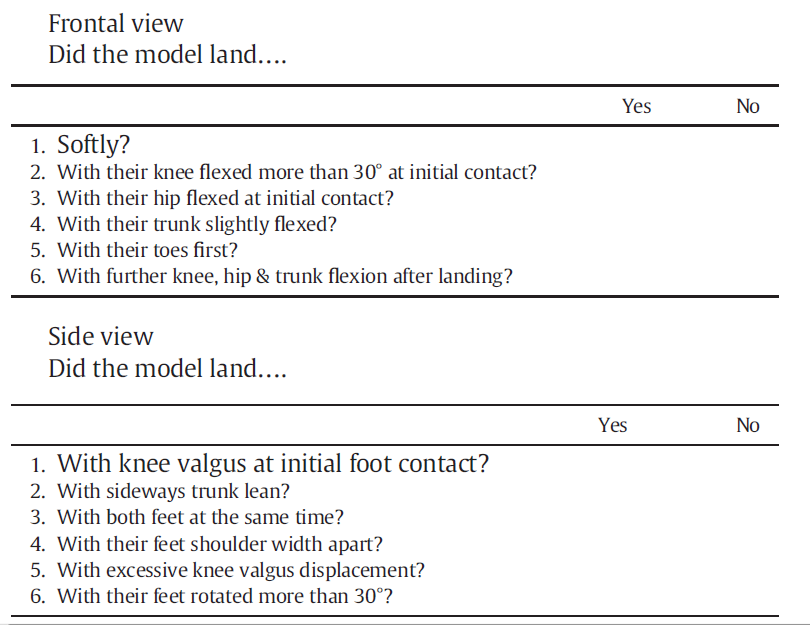 In the first study we found that the use feedback can reduce knee valgus (Munro and Herrington, 2014). This study consisted of participants being given video and verbal feedback on their own performance of drop jump task. The feedback was simple and took minutes to administer and resulted in a 24 degree decrease in knee valgus (measured via 2D video). An example of the feedback can be seen in the picture.

Most recently, we have shown that 4 weeks of jump training can reduce knee valgus by almost 40% (Colclough et al. 2018). In this study, a group of female gymnasts completed a jump training programme for 15 minutes as part of their warm-up, 3 times per week. They found reduced knee valgus in both a tuck back somersault and drop jump.

Whilst in each of these cases the studies show that reductions in knee valgus can be achieved, it is unclear whether this will occur in other tasks. However, we have also found that knee valgus is correlated across several different tasks (Jones et al. 2014; Munro et al. 2017) therefore it is likely (but not definite) if we can reduce valgus in one task it will be reduced in others, therefore reducing ACL njury risk.

ACL injuries cannot be avoided completely. However, we can implement strategies to reduce the risk of injury overall. The best strategy to employ is a rounded programme that includes strength & jump-landing training whilst making sure you are getting relevant feedback on your performance throughout.

If you would like more information about reducing your risk of injury (not just ACL) then get in touch!

The page you requested could not be found. Try refining your search, or use the navigation above to locate the post.